History of Halloween
The ancient Druids in Britain, the pagan Romans, Greeks, the Babylonians and others kept the Halloween Festival.

Halloween antedates Christianity by many years! It was introduced into the Christian world hundreds of years after the death of the apostles.

It was a Druidical belief that on the eve of the Samhain festival, the lord of death, called together the wicked spirits that within the past 12 months had been condemned to inhabit the bodies of animals.

"In ancient Britain and Ireland, the Celtic festival of Samhain was observed on October 31, at the end of summer. This date was also the eve of the new year in both Celtic and Anglo-Saxon times and was the occasion of one of the ancient fire festivals when huge bon fires were set on hilltops to frighten away evil spirits.... The souls of the dead were supposed to revisit their homes on this day, and the autumnal festival acquired sinister significance, with ghosts, witches, hobgoblins, black cats, fairies and demons of all kinds said to be roaming about. It was the time to placate the supernatural powers controlling the processes of nature. In addition, Halloween was thought to be the most favorable time for divinations concerning marriage, luck, health and death. It was the only day on which the help of the devil was invoked for such purposes. The pagan observances influenced the Christian festival of All Hallows Eve." Ency. Britannica Vol. IV p862.

It was a pagan belief that on one night of the year the souls of the dead return to their original homes, there to be entertained with food. If food and shelter were not provided, these evil spirits would cast spells and cause havoc toward those failing to fulfill their requests.

Literal sacrifices were offered on this night to the spirits of the dead, as they supposedly visited their earthly haunts and their friends.

"There was a prevailing belief among all nations that at death the souls of the good men were taken possession of by good spirits and carried to paradise; but the souls of the wicked men were left to wonder in the space between the earth and the moon, or consigned to the unseen world. These wandering spirits were in the habit of haunting the living...But there were means by which ghosts might be exorcised." Folklore, James Napier p11.

To exorcise these ghosts, that is to free yourself from their evil sway, you would have to set out food and provide shelter for them during the night. If they were satisfied with your offerings, they would leave you in peace. If not, they were believed to cast an evil spell on you.

Halloween Christianized
It was a general practice of the Christianized Roman Empire and the church at Rome to convert the pagans within the empire as quickly and on as large a scale as possible.

Ever since the time of Constantine, who made Catholicism the state religion, the Roman Emperors realized how essential it was to have a unified empire, where as many as possible would have one mind. The civil and religious leaders saw how important it was for the for the sake of unity to allow only one religion within the Roman realm.

It became a state policy to force all non-Christians to accept the orthodox faith. The conquered pagans had a profound influence on the affairs of the church. These pagans brought with them many pagan practices and celebrations. Halloween was merely one of many. The pagans were fervent in clinging to their past ceremonies and observed them openly, yet they were supposed to have been converted to Christianity.

THE HARM OF HALLOWEEN

What harm could there be in Halloween? Halloween can be a dangerous and harmful day and here are some reasons why.

An article from an Ann Landers column gives us an idea of the harm of Halloween. The title of her column was "Parents must tackle violence." The parent wrote, "I heard something today that made my hair stand on end. I hope you will deal with it in your column because it is a symptom of a problem that warrants deep concern. Last October, the teacher of a fourth grade class asked her students to write a short essay on what they would like to do most to celebrate Halloween. Eighty percent of her 9 year-olds expressed the wish to `kill somebody.' Where do children get such ideas? I believe it is fair to say that they get them from movies or TV.

This letter hit the nail on the head! All parents ought to be concerned. Halloween is desensitizing our children by its glorification of violence, death, mutilation and gore.

Consider for a moment the "Nightmare on Elm Street", "Halloween", and "Friday the 13th" film series. They are popular viewing fare at Halloween parties. Who or what inspires these "actors"? Robert Englund who plays mass murderer Freddy Krueger in the "Nightmare on Elm Street" series says he draws his inspiration from the late Ted Bundy, who raped and murdered more than 28 women. Englund told Slaughterhouse magazine, "I just read an article on Ted Bundy, so a lot of my imagery is based on him."

At the least, exposure to sadism, sexual violence, satanism, torture, mutilation and bizarre murders causes our kids to become calloused to these behaviors. But, Harriet Kozkoff, a public TV producer told the press, "Entertainment is a powerful socializing agent in contemporary society. Slasher and horror movies...use violence and sexual arousal to maximize profits and are an inevitable prescription for conditioning sexual sadism into our pre-teen, teenage and young adult film fans."

Psychiatrist Dr. Thomas Radecki said, "Every year film violence and real-life violence continues to get worse. We must protest and stop this growing sadism in our homes, schools, and on our streets."

Obviously, the problem is wider than just on Halloween. But TV programming and video rentals of violent horror films is at its peak at Halloween.

Halloween is harmful because of its emphasis on violence and death.

An article in the Milwaukee Journal, entitled "Haunted House Fun: It could become a nightmare for kids" stated, "It's just for fun, you know that. But to a young child, a trip through a `haunted house' created for Halloween could be a nightmare." Psychologist Marvin Berkowitz of Marquette University said, "Some haunted houses can frighten an adult." He warned that a child must "go in with the right mental set." He said, "Make sure they know it's going to be a fun scare, not a real scare." The article went on to say that even though you do your best to let the child know this he can be traumatized by such an experience."

Exposing a vulnerable child can have harmful consequences that run the spectrum from nightmares to emotional damage. In fact, Dr. Grace Ketterman, M.D. says in her book, You and Your Child's Problems, "A tragic by- product of fear in the lives of children as early as preadolescence is the interest and involvement in supernatural occult phenomena."

Halloween is harmful because of its emphasis on fear and horror.

People who would not ever involve themselves with the occult at any other time will experiment at Halloween parties with seances, Ouija boards, levitation, rituals and ritual sex.

Did you know that Devil's Night (the night before Halloween) is the worst night of the year for ARSON FIRES? In Detroit, Michigan in 1983, 450 fires were set by pranksters. To add to the trauma, more personal property is defaced and public buildings damaged at this time than any other time of the year.

What about Trick-or-Treat? In Milwaukee, Wisconsin hospitals x-ray candy received while "begging" to be sure no foreign objects, like pins or razor blades, were in the goodies.

Malicious Halloween pranks even kill people, like the lady who had a pumpkin dropped on her car from an overpass. It went through her window and caused her death.

SUMMARY
Halloween is a sinister day with occultic roots. As we move along in the last days an increasing number of people are realizing that Halloween is a pagan worship day. It is day that honors false gods, demons and Satan. I have no desire to enter into the worship of false gods nor honor the devil. I hope after considering this study you will agree and decide NOT TO CELEBRATE HALLOWEEN. Put Ephesians 5:11 into practice, "...have NO fellowship with the unfruitful works of darkness, but rather reprove (expose) them." 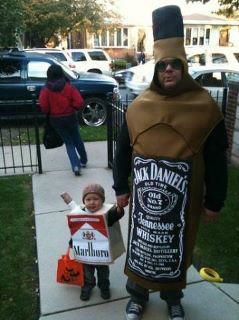 What do you think?

What type of future do you think this child is going to have in the future? Do you think this is cute? Maybe if you are not a born again Christian. Hopefully no Christian would think this is just innocent fun. Having your child dressed up as a pack of cigarettes when the warning label says "Smoking will cause lung cancer" does not seem like something a parent should do.

Or how about a web site that is titled, "Dressing Up Your Daughter as a Slut". It advertises having costumes for girls as young as 4 years old.

If Halloween is just an innocent day of having fun, why does it draw the immoral nature of people?

Christ is not honored by celebrating Halloween.  Replace the celebration of Halloween with something completely unassociated to it. You can make it a family night and do something special together, the PRINCIPLE OF REPLACEMENT. Romans 12:21 teaches  "Be not overcome of evil, but overcome evil with good."

Certainly remove the bad. Explain to your children why you are not celebrating Halloween any more. BUT then replace it with something that will glorify God (I Corinthians 10:31). Be creative. Make what you do more fun, yet honor Christ. Have a harvest party where you focus on Christ the creator and his provisions for you. Have a Christian video party. Have a glory gathering where Christian songs are sung and the word is preached. Get a group together and go from door to door and pass out Gospel tracts then meet for a time of fellowship afterward.

Prayerfully consider what Christ would have you to do. May your desire be that of James, "Submit yourselves therefore to God. Resist the devil, and he will flee from you. Draw nigh to God, and he will draw nigh to you." (James 4:7-8).

More about the origins of Halloween, and the truth from God's word.

Creative ideas showing how to use Chick tracts to witness to the children coming in your door this Halloween.